skip to main | skip to sidebar

With the house pretty well renovated, and the appraisal done (you'll have to wait for more info on this), we decided it was time to have a party. A pajama party. Our friends came over last night for a joint housewarming party slash birthday party for my friend Sterling. We got a keg, a case of other alcohol, some hors d'oeuvres, and our friend Dave brought over his DJ equipment. Yeah, we know how to party.

People toured the house and were duly impressed with the work we've done in the past year. However, they were confused when they got to the second bedroom... In this room I set up my camera on a tripod, hooked it up to a TV, printer and a remote camera switch to it, and had three strobes placed around the room. People weren't sure if this was how the room looked normally. I assured them this was only for the party. What they didn't understand, is that it was a photo booth. 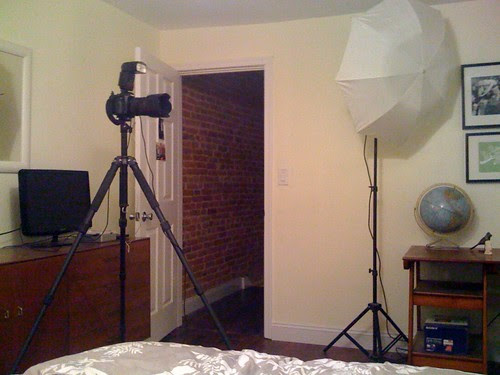 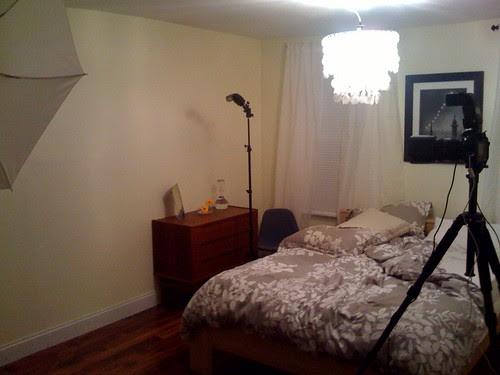 Click each picture for details on the gear in the picture

All people had to do was stand in front of the camera and hit the button on the remote to take a picture. When they hit the button three strobes went off, freezing their drunken moment in time. After the shot was taken their picture was shown on the LCD TV pointed back at them. If they liked the picture they could click a button on the camera and have it printed out. The whole setup was a blast.

And now is the time in the post where I get to place random commentary on some photos from the night. :-) 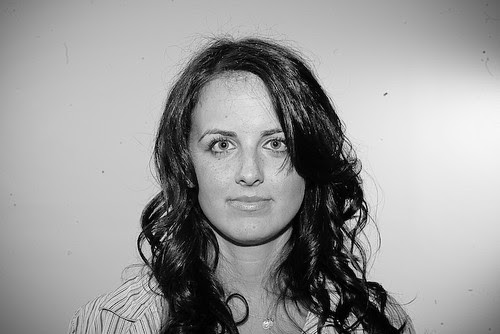 This was early in the night. Notice the sober look. 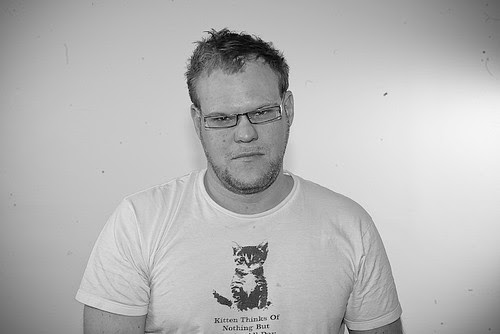 Apparently Shane wasn't pleased. Or was having a very emo moment. 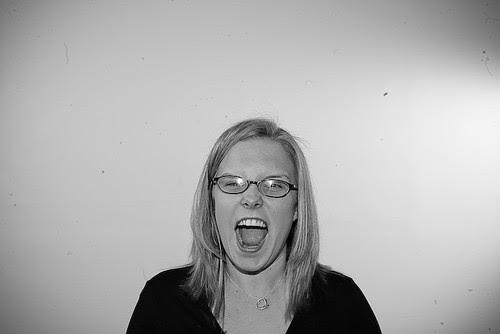 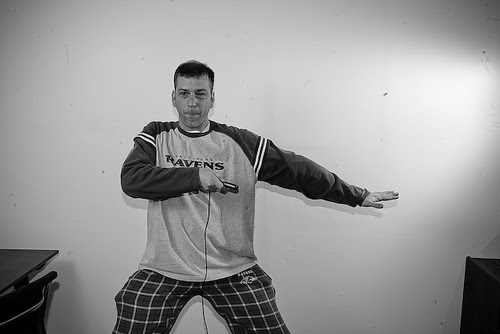 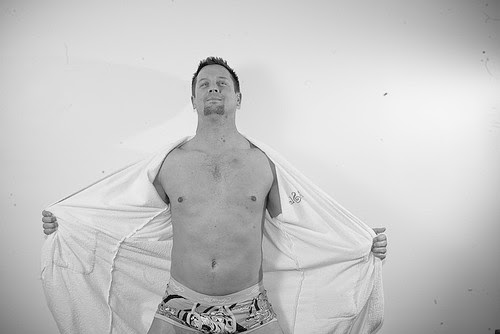 When Matt opened his robe I was grateful he was wearing undies. 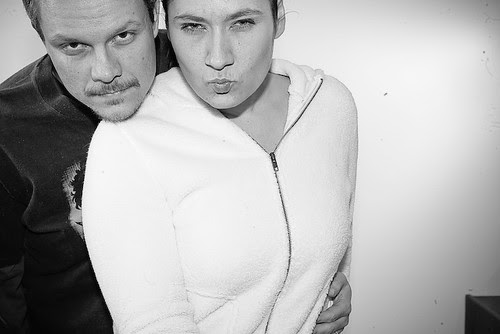 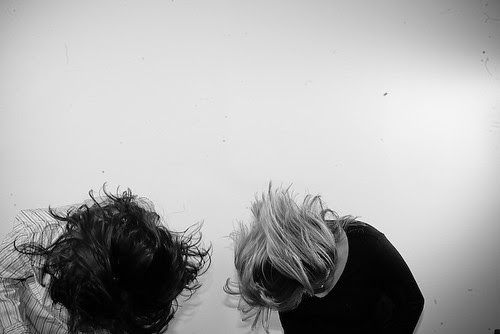 The girls thought it would be fun to do some headbanging. The queen's neck is still sore for this endeavor. 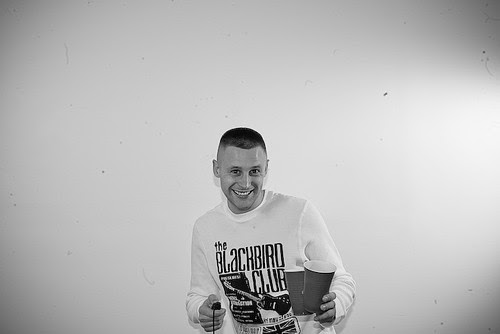 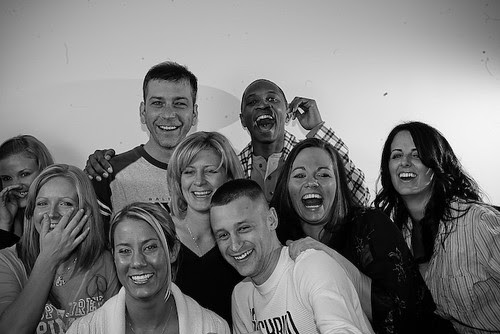 There are a lot of pictures like this, with people staring at the monitor and laughing about the previous picture. 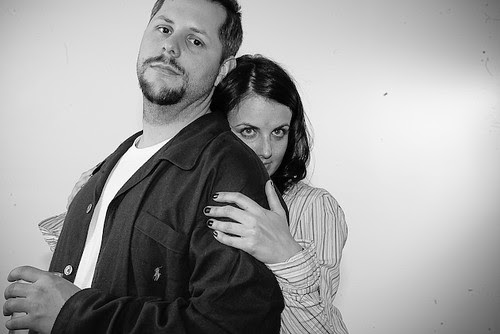 The Queen and I. In all of our PJ'd glory. 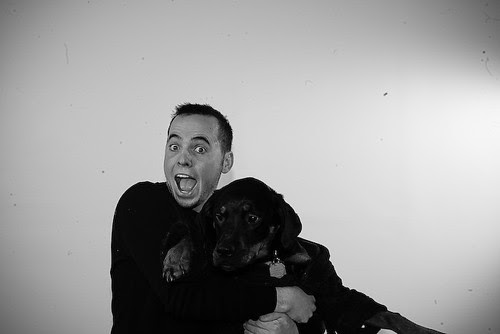 Wally even got pulled into the melee. What you can't really see is that he was wearing a childrens robe we picked up at Target. 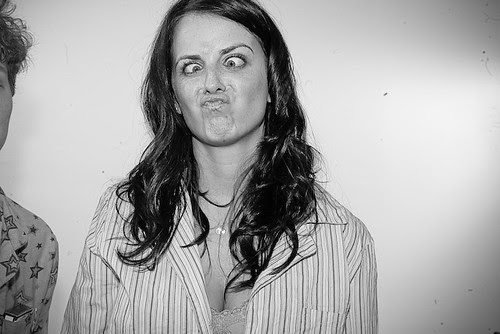 This is her poker face. 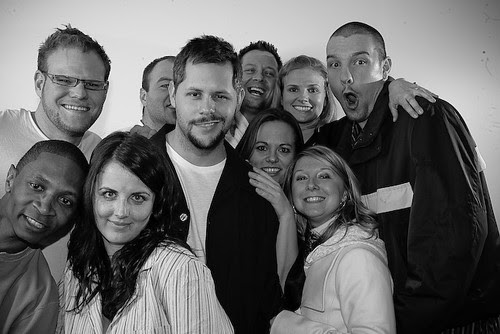 Why am I smirking? This was probably soon after we killed the keg. :-) 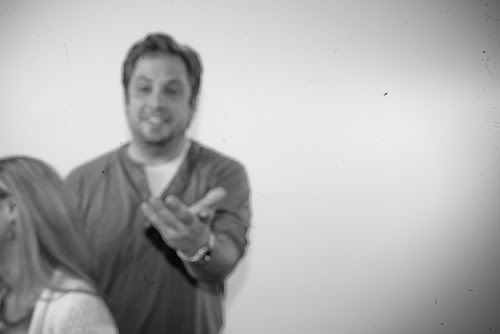 Jeff scaring his girlfriend away.

Check out the full slide show for all the pictures taken from the photobooth. The shots are in order from the beginning of the night until the end, and this set has every picture taken. :-)

Hooray, I've been checking the blog every 10 minutes waiting for the pictures! What a great idea, cool setup. Hope the VIP party has a photobooth, too.

Awesome celebration, and we worked our butts off for it that's for sure. I can't imagine besides you I could renovate an entire house with and live to tell about it :-)

That's a cute idea for a party.

I'm trying to figure out when we do ours. Do I wait for trim, or not? How many doors have to be in?

I wonder where we could rent such a large number of good lookin' friends?

Im glad I recently stumbled upon your whole blog and project. Im starting a similar project and decided to blog about it as well. An old 1920's duplex, 3 floors, full rennovation, long layout. We'll see what I come up with.

Love the pajama party idea and the photobooth!

Great way to end the marathon renovation push. Congrats on being "done."

LOL OMG at the flasher

what an absolutely awesome thing for a party (the photo booth). i'm sure your friends loved it.